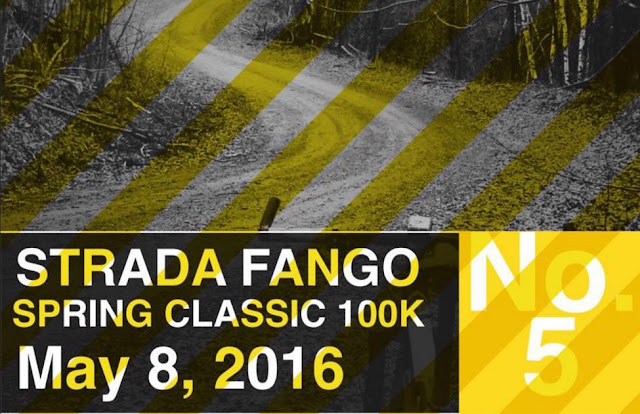 A few years ago I did the Strada Fango as my very first major gravel ride with fellow Woollies Frank, Keith, and Dallas.  That event was a little earlier in the year, or winter hung around a little longer, or a combination of both.  That year we had a 3 mile stretch completely covered in snow, and the frost was still coming out of the road.  That was a huge effort for me at the time.

Just last week I was looking at my calendar and realized that this year’s edition fell on a day I was available to go again.  I was excited to give this another go and see how my bike fitness stacks up against a few years ago.  I was also excited to ride with fellow Woollies Nate and Dallas as well as Herr Woolly, Starr.

Nate and I rode the Mammoth Classic 100 together 3 weeks ago.  This was “only” 75 miles, but I knew it was not an easy 75 miles.  I’ve been doing weekly Park Repeats though so I’ve done more structured cycling workouts this spring than in any previous so I was fairly confident I was more fit.

There is a new bike in our family which required a new framebag to carry gravel adventure goodies.  With good planning I decided to start that project at 6:00 on Saturday prior to packing myself for the ride.  So while I was sewing in the dining room, Starr was in the garage wrenching on her bike.

We finally finished packing and were in bed by 1:00 am on Sunday morning.  Totally fine prep for a ride that starts 1.5 hours away at 11:00 am.

Continuing the excellent preparation theme, I was rolling back in the parking lot to drop another bottle of water in the support truck when the race started and everyone was riding the other direction.

That’s OK, I needed a little extra hard warm-up right?  The 3/4 of a mile or so is paved and all uphill and then it dives into the gravel.  The gravel in the first part of the course was pretty soft and loose this year.  It made chasing the lead group down a little more exciting and hard work.

No sooner had I caught the lead group and I came off the back.  My HR was well above 75 mile pace.  Thankfully fellow Woolly Nate eased off with me.  We were a good match for fitness a few weeks ago.  The pace was definitely still higher than 75 mile pace, but the lead group hadn’t quite gotten out of sight yet.  They were about to get out of sight and I would have let up a little more when Friend of Woolly Tim came off the back of the lead group.  Sadly that meant we had to keep chasing to catch him which we finally did as we hit the first stretch of pavement.

Nate and I settled into more of an all day pace finally and spent the next two hours rolling through the hills.  Nate spun out on one of the steepest pitches that also had some of the loosest gravel on it.  So I had to take a picture to commemorate it. 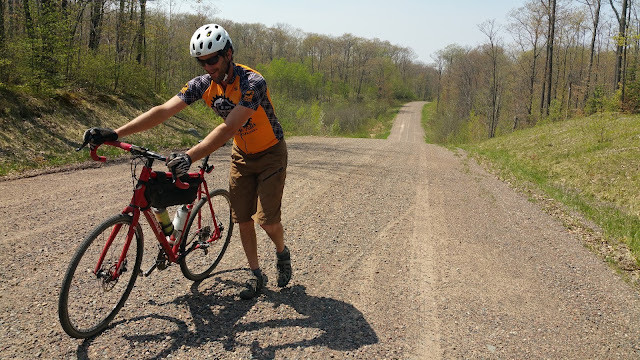 I’ll admit to pushing the pace in the final few miles before meeting up with Noah at the truck to refill bottles.  I’m not really sure why other than thinking it was taking me longer than I expected and thinking Starr might not make it before the 2:45 cut off as it was already 2:00 when we got there after some not so easy riding.  Turns out she didn’t make it along with a few other people, but Noah back tracked the course to check on folks.  She would have been fine anyhow, but I can worry a little even if she’s never given me any reason to.

Back to the aid station.  Nate and I rolled in to find Adam, Jon, and Nathan all still there.  We refilled bottles, got a pretty obfuscated message about a bridge out at mile 57, and were off with the trio ahead of us.  They gapped us pretty much off the line and I was fine letting them ride away from us.

The next stretch of roads I do not remember fondly from my ride in 2013.  That year I also left with a group and had them all ride away from me until I hit Imalone Rd and definitely felt like I was all alone.  This year, other than not being able to hang with the other three guys, I was feeling fine and Nate and I continued to roll along.

Unfortunately on Imalone Nate flatted.  Unlike the road name would indicate, I did not abandon Nate and instead tossed him my spare tube and pump (so he didn’t have to patch and use CO2) and stretched for a few minutes while he got going again. 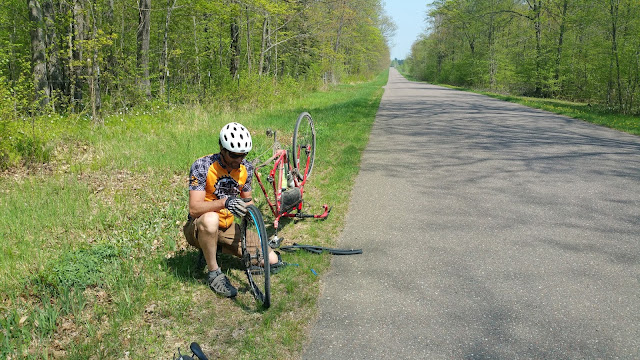 Next we climbed the stair steps on Sentinel Ash Rd.  I definitely remember those from a few years ago as well.  This year the leaves were coming out providing a nice shady canopy over the road both keeping us a little cooler and obscuring the size and number of steps yet to go to the top.

The left off the top of Sentinel Ash bombs you down a quick descent followed by another steep climb.  On the 2013 version of the Strada this was the final big hill of the day.  I thought it was going to be again.  Nate was pretty sure there was some Norwegian still to come, but I wasn’t so sure.  A quick check of my sweaty cue sheets once we hit pavement again confirmed that Nate was right, we weren’t done climbing yet.

But first was the choose your own adventure part of the course.  I’m for a little adventure in my ride so I was all for the bouncy extension ladder like bridge across the stream.  Oh, and that big hill too.

After the bridge crossing we progressed our way to Norwegian Rd.  Its a bit like Oriole for those familiar with Almanzo.  You have about 10 miles to go, and a big, steep, ugly hill in front of you.  Nate, myself, and one other gentleman I can’t remember his name all managed to grunt our way to the top of that sucker.

In post ride analysis, climbing Norwegian was basically a Park Repeat for me at mile 65.  Here in the valley the climb in Interstate Park from the North Campground to the visitor center is a go to interval workout.  A good hard repeat will take me about 4 minutes and will have my HR above 170.  That was about what this was.

After that I was back on the gas for the remaining 10 miles or so.  I’m not sure exactly why I was in a hurry to finish, as that wasn’t going to get me off the bike any sooner as I’ll explain in a minute.  But with a little final push through a little nausea in the last couple of miles I was able to ride into Murphy Flowage Park after 5:25:26 of riding and the sixth finisher of the full course.

After a quick chat with fellow Salsa Warbird Squadron members and second, third, and seventh finishers respectively Dustin, Nathan, and Nate I reloaded all of my water bottles, applied some more sunscreen and headed back out on course.  See I’m kind of fond of the Herr Woolly rider still out on course and I told her I would come back out and ride the rest of the course back in with her.  What a guy will do for love… 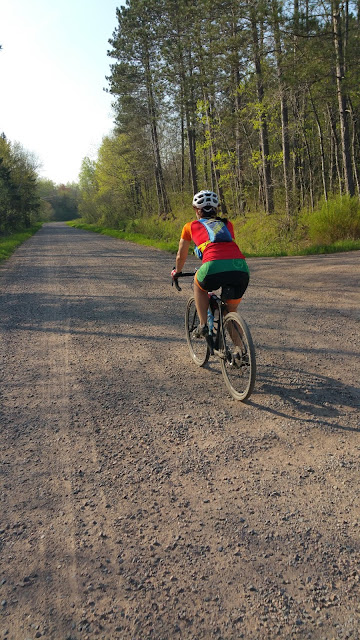 I was pretty tired and was hoping she wasn’t too far away.  I was really concerned that if I got all the way to Norwegian and hadn’t run into her yet I was going to have to climb that hill again.  Thankfully I was still on the fire road when I came across her.  She was of course completely fine, but it was nice to share 45 minutes of riding together.

So in the end I was pretty pleased with the official Strada Fango ride, but I also got a bonus 16 miles of riding in for the day.  Not too shabby at all.  The BBQ in Rice Lake on the way home definitely hit the spot though and I slept well.

My typical report ends with a preview of what events I’ve got coming up.  Fellow Woolly Nate and I are teaming up to do something that definitely is a stretch and slightly scary this coming weekend.  I won’t commit it in writing here just yet, I’ll wait to make sure we accomplish it before that.  Then I really need to hit some single track as I have the Tatanka 100 coming up in July and that is also scaring me.  So hopefully I’ll be out on the Woolly Trails soon and hopefully I’ll see you there.