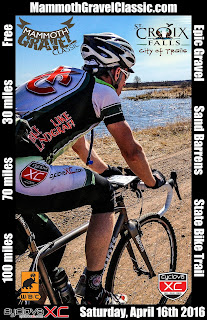 Even though we are just a week out from the Woolly Race and I know people are getting excited to kick off the MN Mtb Series racing I want to take a quick moment to reflect on the Mammoth Gravel Classic from this past weekend first.  Some of you may be familiar with my race reporting over on the CyclovaXC blog, this will be similar, but different.

We would love to have some more content for the Woolly page.  If you have a write-up of the event or would like to write something up, please get in touch.

Here are a few other reports that I already know of:

Event Summary
Before I get into my personal report we can cover the overall event.  In this fifth edition we were treated to probably the best weather yet. We’ve had two editions affected by major snowfalls and I rode one in 40 degree rain, so 70s and partly cloudy skies are fantastic. We did have to deal with what I’ll call “The Breath of the Mammoth” on the return trip for all the riders. A steady 15 to 20 mph wind out of the south was definitely a bit of a downer as you headed south back to St. Croix Falls on the Gandy Dancer.
All told there was approximately 275 people who signed a waiver and participated in one of the three rides.  That is a record for this event.  I think most people found the day challenging and enjoyable. I heard of two issues. Unfortunately we had one rider crash at mile 99 on the ruts left on the Gandy from illicit motor vehicle use. He is getting some new hardware installed on his collar bone next week, but is in good spirits. I also heard about a couple of 70 mile riders that got a ride back to the Gandy from Crex Meadows (decidedly off the 70 mile course)  but since I heard about it they clearly survived though they may have gotten more ride than the bargained for.
In total I think it was a great event with something for everyone.  A huge thanks to Frank Lundeen for being Mammoth Man again this year and pulling it all together.
My 100 Mile Report
This was set to be my third Mammoth Gravel Classic 100 event.  I’m in an interesting place where I’m getting close to 10 gravel centuries under my belt so on one hand they seem like no big deal (been there, done that, didn’t die).  On the other hand, I’m a skier not a fat biker in the winter, so these spring rides leave me a little wanting for bike specific fitness.  The week before I rode 50 miles on my mountain bike on the gravel roads out in Carlos Avery and was pretty well spent at the end.  So going in I was highly confident I would be able to finish the event, it was just going to be a matter of how much I was hating life and my bike when I got back to St. Croix Falls.
The Woolly and close Woolly friends were well represented at the start of the 100 with probably close to a dozen riders (in no particular order and apologies if I missed someone, Frank, Jason, Nate, Steve, Steve, Ben, Greg, Greg, Tim, Jim, and myself).  The odds seemed high that I would have a chance to ride with someone for a good portion of the day.

The initial 13 miles or so of the 100 mile course are a paved roll-out along the river.  With a large pack of 20+ riders and a nice tailwind this was an easy cruise at 20 mph.  The first short gravel section saw things get excited in a hurry with a decided increase in effort.  That was short lived though and we were back on pavement for another two miles where with a little chasing the majority of the pack regrouped.

And then, as we turned onto 300th Street just shy of 17 miles, things blew up for good.  Last year the really soft section in the Barrens, really wasn’t too bad and ended up just being a mile or two of really soft stuff.  This year was different.  It was a solid 7 miles of really soft beach like riding.  There were riders everywhere for a while.  I’m happy to say, despite my less than stellar bike handling skills I was able to ride the whole thing cleanly, though it was a huge effort to keep the tires rolling at times.

Coming out of the super sandy stretch onto O I was definitely feeling like I was putting in above 100 mile level effort.  I found myself next to a couple of strong guys on mountain bikes.  Within a few miles as we turned into Fish Lake State Wildlife Area we pulled in fellow Woollys Nate and Steve and another Steve.  The effort continued high as we did a little pace lining all the way to Grantsburg.

Grantsburg was a super short stop to just refill water and Nate and I were back on the road with the same crew again minus Woolly Steve who had rolled through.  Again the pace continued really high through Crex Meadows.  I was still taking my turns on the front, but it was sometimes hard to catch back onto the back after a pull.  Headed east and occasionally south we could definitely get a feeling for the headwind we were going to be facing once we got onto the Gandy north of Siren.

Just before we reached the Gandy our group of five was caught be another group of three that included friend of Woolly Mike.  Things got a little silly here in my opinion as the pace started to surge the last few miles of pavement before hitting the trail again.  Before we finished going around the airport Nate and I both sat up.  We were cooked.

We stopped in Siren to refill bottles again and take a short rest break.  Nate and I were both feeling a little nauseous.  We made sure to give the other group stopped there a few minute head start back on the trail to make sure we didn’t get any silly ideas of trying to hang with them.

This was the start of our dark times.  This stretch of trail from Siren to Frederic is a false flat and coupled with the wind we were slowly turning the pedals just eeking out 12mph after having averaged 18mph (including stopped time) to Siren.

Once past Frederic Nate and I started to eat our way out of our respective bonks.  Food didn’t sound good, but I knew I needed to get something down.  We finally made it to the oasis of Cafe Wren in Luck where we decided to take a good sit.  Espresso Malts for both, a peanut butter sugar bomb of some kind for me and a black bean wrap for Nate.

I also happened to be here at the perfect time to spend a few minutes with my girlfriend Starr who was riding the 70 miler. 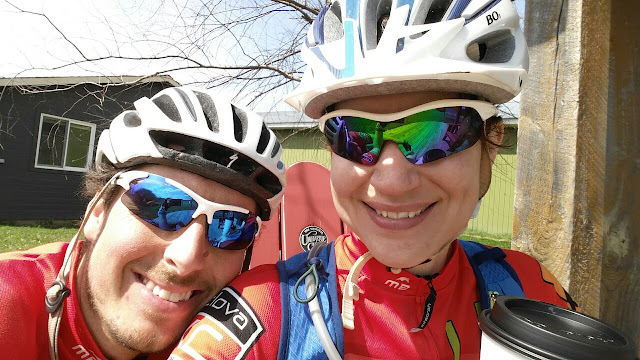 Nate and I sat for probably 30 minutes before heading out again.  While sitting we tried to cheer on Steve, Tim, and Jim as they rode past.  The Roar of the Mammoth was in their ears though and they didn’t hear us.

Finally feeling refreshed we hit the trail again.  I knew that once we hit Centuria it was pretty close to “all down hill from there”.  We decided not to take a quick spin on the Woolly single track as we rode past.  We rolled in at a little before 3:30, tired but not destroyed.  Despite doubling my long ride of the year I actually felt better than expected.  On wards and upwards.

I hope to see everyone at the Woolly Race next weekend.  I’ll most likely be taking your money if you are doing day of registration.