Weather we race, or not…

For the last 10 years, we have hosted the St. Croix Valley Woolly Mountain Bike Race.  For 8 years, Mother Nature smiled on us and blessed us with great weather.  Last year, Mother Nature was unhappy with the Sport and Marathon Class racers because during their race, IT POURED.  I don’t mean nice sprinkles.  I mean buckets full of water dumping down.  It wasn’t pleasant for racers, fans, volunteers or anyone…except maybe ducks.

Last years experience has us a bit cautions.  This week we have also been questioned by club members, Minnesota Mountain Bike Series personnel and several racers.  As we watch the weather forecast leading up to this weekend, I have decided that meteorologists have the easiest job in the world.  Just make something up for the next week or so, then change it frequently, so no matter what the weather ends up being, you were right with one of the guesses.

That being said, I have been checking the forecast hourly…OR MORE for the past few days.  First ,weather was going to be great next weekend, then it was going to be nice for the week, but a chance of showers on race day, then it was going to rain all weekend. Forecast then predicted heavy rain rain during the week, but be nice for the weekend.  At one point, we were forecast to have a full on monsoon which is weird, since we are in the middle of the country and no where near an ocean.  (I thought the temperature was expected to be 27,000,000 degrees F, but then I realize I was actually looking at the forecast for the  actual surface of the sun, so that temperature made more sense to me.)  Literally, as I was discussing the grim forecast earlier today with one of the guys on our Physical Committee, the forecast changed drastically and got much more appealing.

Currently we are here with “occasional rain showers” on Thursday, then perfect through the weekend. 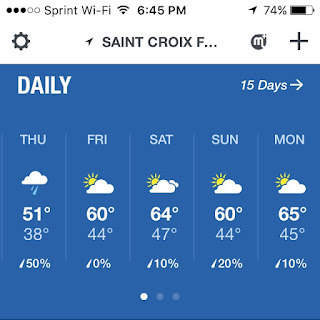 So…will we race or not?  If the monsoon hits, NO.  If the temperature reached 27,000,000 degrees F, NO.  Anything between these extremes, ABSOLUTELY.  The Minnesota Mountain Bike Series does have a few open dates in their schedule for as rain dates.  Tomorrow (Wednesday) is the deadline for a change.  We will look at the weather forecast (then ignore it because it is just a random guess), we will consider the condition of the trails and how we expect they will be on Sunday.  We really don’t want to reschedule and will do so only as a last resort.  Considering we had several inches of snow on the ground a couple years back in the beginning of May, this year the weather does seem to be shaping up nicely for a mountain bike race.
Please don’t plan to just show up for your event, then leave.  Plan to make a weekend of it in Woollyland.  We are expecting a great weekend.  Plan to come up on Saturday for a pre-ride and bring the family.  Spring Awakening is a fun event in town that will have lots of fun outdoor family activities both Saturday and even during the race on Sunday…can you say “petting zoo” for the kids?!?!  Plus, one of our new sponsors, the Dalles House, is hosting a Pre-Woolly party Saturday PM for a “less family friendly” activity.  This will feature The UnderGroove, a great funk band out of the Cities, plus Woolly burger specials and even a Woolly named beer because carb-loading and pre-race hydration is critical.
There is a weekend full of fun on tap with the Minnesota Mountain Bike Series race on Sunday as the highlight, but hardly the only activity in town.  And please, make sure people know you are here for the bike race.  It is important that the community realizes what an asset we have with our trail network and hosting great events like this weekends race bring people to town.
See everyone soon…